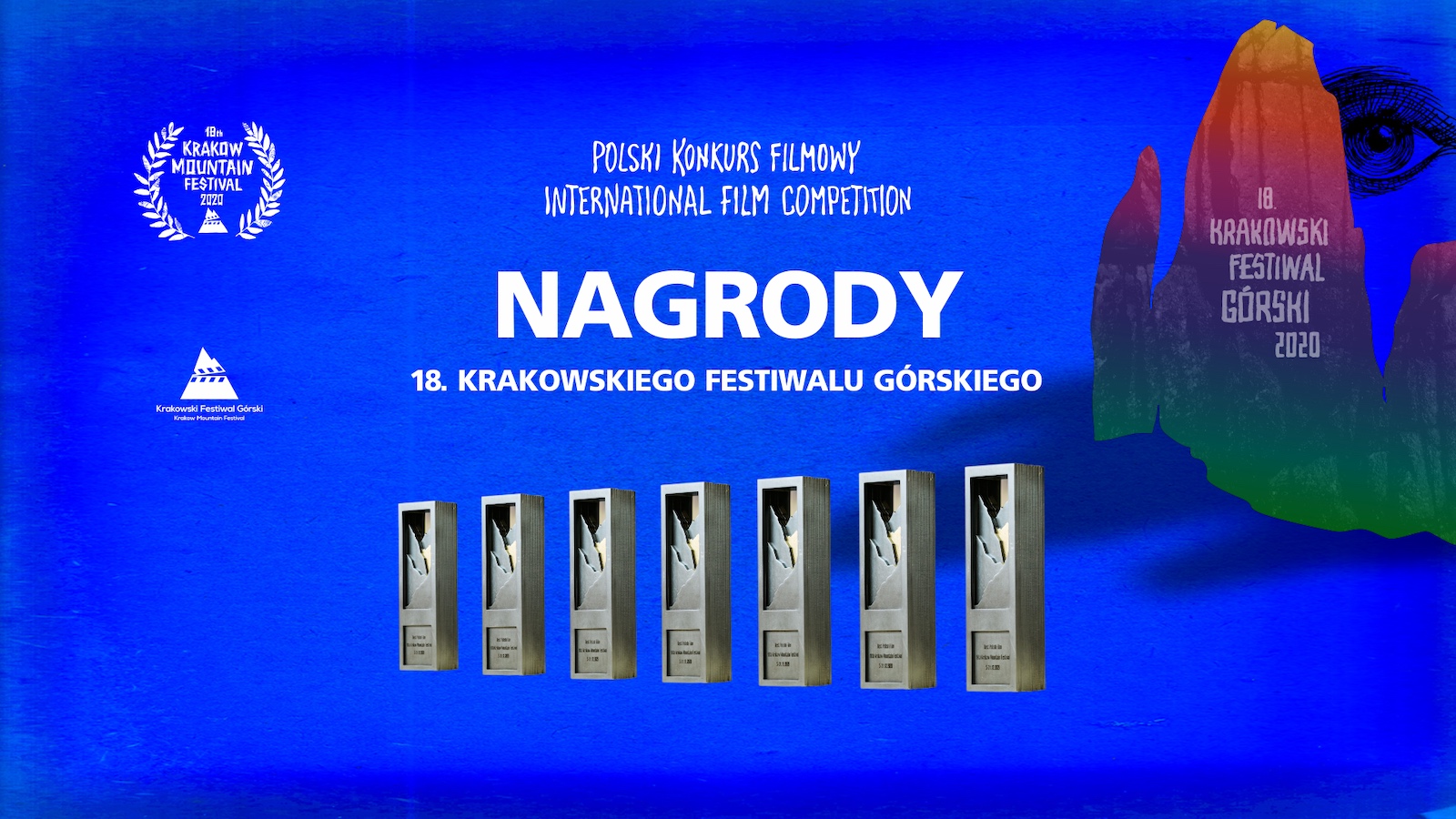 The KFG Film Competitions (Polish and International) are traditionally one of highlights of the Krakow Mountain Festival (KFG). This year, despite the unusual online format of the Festival, the Jury had a tough choice – in total there were almost 50 competing films. Last weekend, we discovered the winners in separate categories and the laureate of the Grand Prix – the film K2: First Descent by Sławomir Batyra. Congratulations!

Let’s start with the International Film Competition. This year, the Jury, consisting of Dariusz Załuski (Himalayan climber, film maker, author of mountaineering films), Robert Sowa (head of the Animated Film Department at the Krakow Academy of Fine Arts) and Stanisław Berbeka (graphic designer and film maker), had an especially challenging task. The jurors had to choose from 37 documentaries. Yet, they succeeded 🙂

K2: First Descent (K2: Pierwszy zjazd), directed by Sławomir Batyra, was chosen the best film of 18th Krakow Mountain Festival. According to the Jury, it is an entrancing picture. As we could read in the Jury’s statement:

For showing an amazing feat in an exceptional way. The historic achievement of Andrzej Bargiel – a ski descend from the K2 summit – was shown in the film in a visually thrilling way. Thanks to this film, we may not only experience the scale of the challenge, but also personally witness the great happiness of the Polish skier.

The Grand Prix was personally received by the director who gave a speech on behalf of his film crew expressing how moved and grateful he was. We also watched an online video call with Andrzej Bargiel.

The Wall of Shadows (Ściana Cieni) by Eliza Kubarska was considered to be The Best Mountaineering Film.

For showing that behind ambitions and achievements of climbers and mountaineers there stand also common people – native inhabitants of mountainous areas. The film, set at the foot of a Nepalese mountain, Kumbhakarna, is an insightive and contemplative portrait of people of the mountains. On the one hand, those who look at summits with humbleness and respect, and on the other hand, those who come to conquer peaks.

The award for The Best Climbing Film was received by Samuel Crossley for Free as can be.

On the borderline between the history and the future of climbing, we witness an unorthodox friendship being born between two athletes. The film presents how a relation master-student may be reversed, while a common aim may unite people. The film’s suspense makes it difficult not to cheer and keep fingers crossed for the main characters from the very first minutes of the picture. Light and humorous narration revolves around serious topics such as freedom, friendship and passage of time. “Let’s go rock climbing!!!” 🙂

In this category Godspeed, Los Polacos by Adam Nawrot turned out to be unsurpassed.

This film is an example for how to create a documentary about a great life adventure. Flawless editing, original narration and character portrayal, emphasised by historical footage and beautiful animations, make us follow the story as if we were carried down the river by wild rapids… The film presents emotions and personality of the characters, introduces the viewer into technical difficulties of the challenge, and all this is cast against the background of historically complicated times. This story of friendship, adventure and struggle against an oppressive system is timeless and very up to date, especially nowadays.

In this broad and interesting category John Vatne received the award for his Norwegian documentary Polyfonatura.

This film brings us closer to nature in an extraordinary way. It stops us, calms us down and presents how nature speaks to us through sounds. At the same time, the film intriguingly portrays the main character for whom the world of natural sounds becomes a starting point for artistic creation.

The First Award in the Polish Film Competition was won by Bartosz Stróżyński and his film Trzy sztuki w Antarktyce. The Jury explain their decision in the following words:

The film tells a story of an exceptional adventure. Together with its authors, we have an opportunity to discover the beauty of Antarctica. Tranquil and harmonious photography of local nature and landscapes, combined with fragments of out-of-this-world music give the viewer an impression of participating in a spectacle which takes place in a natural world of art.

This short film shows in a very honest and straightforward way achievements of Roman Ficek, who ran 500 km without any support and in a record time. The director not only managed to get close to the main character and understand his motivation, but also skilfully showed his strong belief in the eventual success. This faith in yourself and optimisms that transpires through the film may act as a beautiful inspiration for everyone to overcome their weaknesses and beat their personal records.

The weekend has come to an end, but stay with us! Because…

The full package of KFG films (with two exceptions – depending on the type of your Access Pass) will be available until December 31st. As Robert Sowa from the Jury said: “Absolutely all films – and there are around 50 in total – are worth watching!”

This time voting for the Audience Award is taking places online. Your verdict will be announced soon!