20th Krakow Mountain Festival. It was good and energetic, as befits an anniversary!

Home  /  Uncategorized   /  20th Krakow Mountain Festival. It was good and energetic, as befits an anniversary! 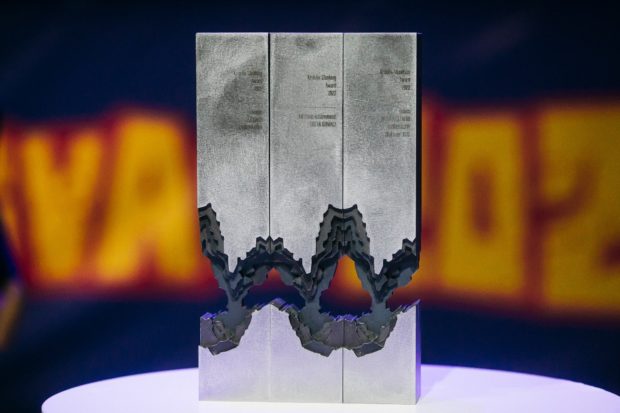 20th Krakow Mountain Festival. It was good and energetic, as befits an anniversary!

This year, on the second weekend of December, real winter covered Krakow, making life difficult for its inhabitants. However, at the same time, a group of enthusiasts in colourful down jackets were enjoying this change of scenery, which undoubtedly suited and added charm to their feast. A feast of mountains, the Krakow Mountain Festival. Here are a few words of summary.

Before we move on to listing the highlights of the programme, let’s look at one of the most crucial aspects of any festival – the atmosphere. Despite delicate whiffs of nostalgia, smelling of chlorine (the swimming pool at the Krakow University of Economics – KUE), most participants, guests and people involved in the organisation of KFG noticed one thing: after the previous edition, somewhat overshadowed by the pandemic (a year ago we were still wearing masks), this year the interiors of the ICE Krakow Congress Centre were successfully filled and, above all, enlivened. It was vibrant, cheerful and energetic.

We almost filled the main hall, which seats 1,800, while lecture theatres and the smaller cinema hall were often bursting at the seams. Meanwhile, the fair, although incomparably much more spacious than the one at the University, at times resembled the old days. Though it’s hard to judge by eye in the huge ICE, we already know that there were twice as many of us this year!

Yet it is not about quantity, but quality. Loads of people expressed their admiration, emphasising that it was the edition befitting an anniversary. Some enjoyed the films (there were more than 50 of them), others the meetings with this year’s guests from abroad (Mélissa Le Nevé, Hans Kammerlander, Stefan Glowacz, Mikhail Fomin and Nikita Balabanov, Peter Peru Chrzanowski and the protagonist of the film Slegato – Alfredo Webber) or the stories of Polish climbers (such as Karolina Ośka and Michał Czech, Maciej Bedrejczuk, , Paweł Karczmarczyk, Piotr Sułowski, Wadim Jabłoński, Filip Babicz, Maciej Kimel, Piotr Krzyżowski and Mariusz Hatala, among others).

Let’s not forget that KFG has always been a unique climbing summary of the year. It’s an opportunity to meet in our narrow circle and talk freely, exchanging experiences. And there was plenty of that this year. Stefan Glowacz, who probably has a pretty good comparison, noted that the energy at KFG is exceptional. He emphasised the value brought by the young generation of climbers and the energy of the organising team.

The atmosphere of the festival was also well evidenced by Saturday’s party, during which the interiors of MOOD, normally a bouldering gym, turned into a wild party venue. Energetic rhythms provided by DJ Vadim and DJ Impregnator attracted the climbing crowd to the dance floor. The good vibes didn’t quiet down until the early hours of the morning, and some people went straight from the dance floor back to the festival.

However, the KFG anniversary was not only a frantic party, after all, a very rich programme was successfully executed. There were a few surprises and twists, workshops and training sessions were extremely popular, and the film selection catered for a wide variety of tastes. Here are two highlights that cannot be overlooked in this summary.

During the jubilee edition of the Krakow Mountain Festival, more than 50 films participated in the film competitions, International and Polish. From among them, the jury comprising Dariusz Załuski (chairman), Piotr Głowacki, Roberto Mantovani, Keith Partridge, Marcin Polar, Monika Witkowska, selected the winner. The grand prix went to the film telling the story of Tom Ballard, The Last Mountain. In addition to the Grand Prix, prizes were also awarded in eight categories (including one new category) as well as two prizes in the Polish competition.

Here is the list of winners (the jury’s justifications can be found at kfg.pl):

In 2018, the first Kraków Climbing Award went to Jerry Moffatt. A year later to his compatriot Ben Moon. These top players of the climbing scene of the 1980s and 1990s probably need no further introduction. Both were, of course, guests at the KFG. In 2022, the impressive trophy went to another legend – Stefan Glowacz!

Rock and sport climbing combines various competitions and types of climbing. A beautiful emanation of its core values is climbing in the great walls of Yosemite. It was on El Capitan that numerous historic events closely linked to the development of rock climbing took place. This is why the ascent by Karolina Ośka and Michal Czech – the free climb of El Corazon 5.13b – deserved a mention. It is not only a sporting feat, but also a beautiful climbing adventure, realised in a humble, smiling and skilled style à la KW Sakwa.

During the 20th edition of KFG, thanks to the film Mendiak 1976, we returned to the extraordinary events in Afghanistan’s Shakhahr. It was there that the participants of the Krakow Academic Alpine Club expedition proved their “fair play”. And this year’s Krakow Mountain Award – Values went to the heroes of the events of the 1970s.

It is incredible how much can happen in two days. Perhaps in this case, the passage of time is better reflected by the change in the weather: we started in late autumn and finished in the middle of winter.

This is not the end, however, as the festival platform on playkrakow.com will be up and running until 15 January 2023! If you haven’t managed to get to ICE, you have the chance to watch some of the festival attractions online!

See you next year at ICE Krakow, we look forward to meeting you on 1-3 December 2023!