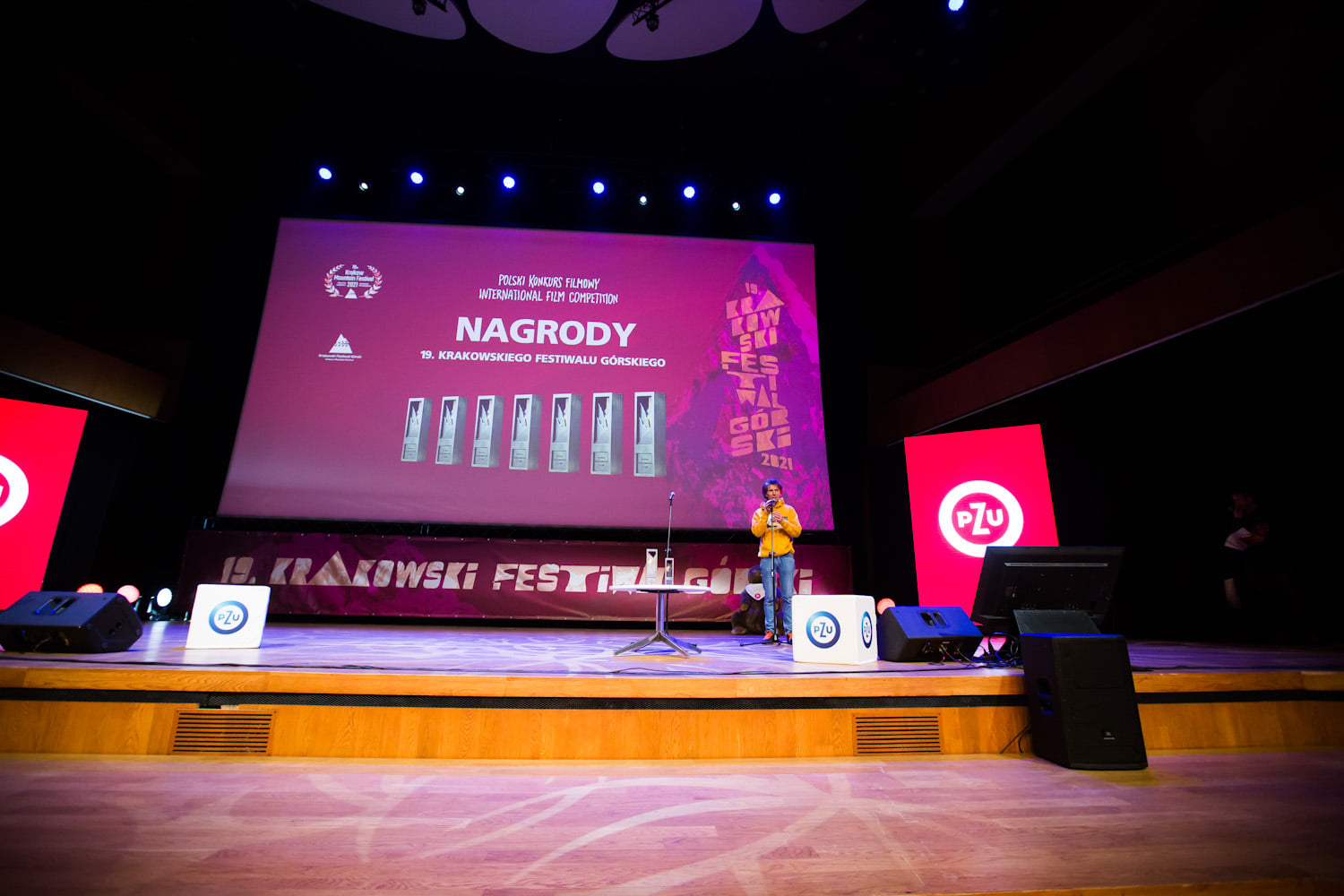 Almost 50 international and Polish documentaries competed in the film competitions of the 19th Krakow Mountain Festival (KFG). The Jury has chosen the winners and below we present their verdicts.

On 5th December 2021, during an official presentation of awards, we found out who were this year’s winners of the International Film Competition and the Polish Film Competition. Grand Prix went to the film Here I Am Again – a story of an Bulgarian mountaineer, Bojan Petrov. Below you may find the full list of the winning films.

The Jury – consisting of Małgorzata Lebda, Sławomir Batyra, Wojciech Kozakiewicz and Dariusz Załuski – decided to hand over the main award of the 19th KFG to the documentary Here I Am Again directed by Polla Guentcheva. The protagonist of the film is a Bulgarian Himalayan climber, Bojan Petrov, who died in 2018 while attempting to ascent Shishapangma.

This film has moved us all. The author succeeded in creating an honest and insightful portrait of the main character. She introduces viewers to a world full of passion, love and determination, yet overshadowed by the approaching tragedy. This makes the relation with the protagonist uniquely deep and human. Important is the multidimensional character of the film. It is also a story of all people left behind at home, who are waiting and hoping against all odds, and when faced with a tragedy, they do not forget.

Thanks to a patient eye of the camera, we have an opportunity to observe life of the main character. The film makers tell us a story about the key values of life by means of very subtle devices. What is interesting, many films presented at this year’s edition of KFG emphasised the topic of pandemic. And similar was the case of this Italian picture. However, here the pandemic topic is interwoven with an intimate story of Roberta, a mother of two, who runs a mountain chalet after a tragic death of her husband. This is also a tale of love – including love of mountains, and an interspecies mutual understanding (with a Labrador Retriver!).

We appreciated the beauty of this personal story, which allowed the creators to express universal issues: family bonds, searching for roots, searching for an individual way of life, determination, and reconnection with nature. This is a climbing film that pushes aside the main character’s ego in favour of focusing one’s attention on the surrounding world. It does so in a gentle way, emphasising that climbing – in its best form – may be a form of art.

Beautifully filmed story of two friends exploring unclimbed peaks of the Karakoram. As the main characters themselves say in the film: “We’ve come here only to do some skiing and we don’t want to adopt some lofty philosophy to do it”. The Jury appreciated the high level of film-making skills in very demanding mountain conditions.

We appreciated this Italian film for its successful attempt to join the ongoing discussion on climate changes and our response to them. The mountain that protagonists are trying to climb becomes an awkward metaphor, an awkward visualisation of this what awaits us in the future. We must admit that this is a painful film, which will haunt us and remain in our memory. This dystopian picture is full of Italian sense of humour, spirit of anarchy, yet the most piercing remains the questions addressed not only to climbers: how are our expeditions going to look like in the future?

It is a colourful and multidimensional tale of love to people, mountains and life. We appreciated a subtle way in which the picture and narration of this film are conducted. While watching the film, one keeps asking the question – how to talk about difficult issues such as an illness (cancer)? The authors of the film and, above all, the protagonist suggest that perhaps just as in this film – by allowing life to speak.

An intimate story told by simple means with an overwhelming strength. The picture, which impresses and remains in memory for a long time, forces you to ask questions about solidarity, community, limits of sacrifice, and finally the most difficult question of all – about the mechanisms of exclusion. The Jury appreciated the unique sensitivity of creators in telling this subtle story.

The opening point for this film narration is an intriguing story of climbing Nanda Devi East in the Himalayas. We appreciated the beauty and poetic character of this picture. It is more than 11 minutes of a suspenseful documentary, which does not shock the viewer with a dramatic story, but allows nuances and details to speak for themselves. The main character of the film is the mountain – honoured by the film-makers. Minimalism in a moving and inspiring version.